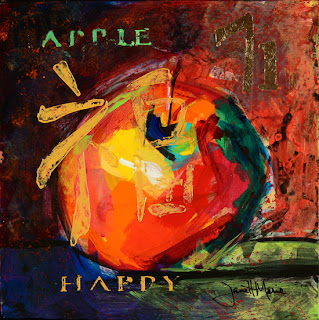 It must be a happy Monday for this happy apple to appear like this! I hope you all are having a great day leading to a happy week!

This panel has gold leaf, oil pastel, acrylic, gold paint, hmm... I think that is it! Mixed media! The 71 in the top right corner is gold leaf, tough to see with the reflection going on...

More apples later... I have a Pink Lady sitting on the modeling stand right now... hmm what will she look like finished?   : ) 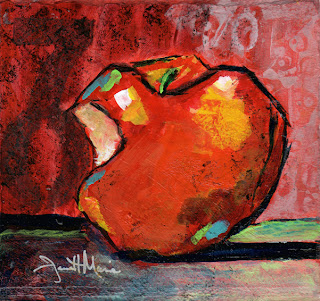 This Rainier honey crisp was sitting out on the kitchen counter patiently waiting for me to do a painting of her.

Today, I finally started the painting, but I couldn't resist taking a bite (honey crisp's are so good), she still inspired this painting and needless to say, I finished eating the apple before I finished the painting!

"Eve" number seventy and moving right along! I still have three on the work table of the Hudson's, they will eventually come around I'm sure!

Have a nice weekend! 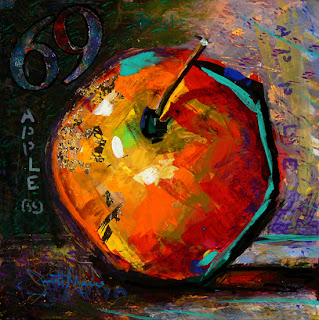 "Looking for the Perfect Apple" 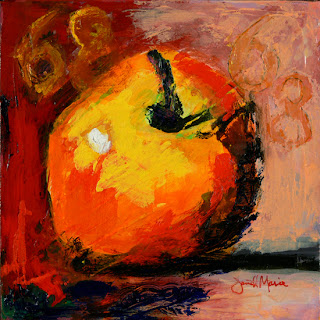 I used a lovely Hudsons Golden Gem apple as a model for this painting. The real apple is actually more gold and yellow ochre in color... I just couldn't resist using the red and orange. The model is gone now too. Oh, if you ever get a chance to try a Hudsons Golden Gem... oooo it was sooo goood, so rich!

Now this is apple number 9 of the Golden Apple Sub-series, the apple actually has a sublayer of gold paint, somehow I've covered it all up. This is still a "golden" apple and a golden gem was the model.

Well, I need to continue on... I must have the "perfect" apple to virtually take to France with me for Martine!

Have a great weekend!

And here you have the rest of the trees!

An itty bitty forest!
Now that I've posted and looked at #4, I think I may need to do a little tweaking to it! It doesn't seem to have the same oof, poof or pop as the others!
Apple, apple, oh where art thou apple?

"Where To Next?" Shopping 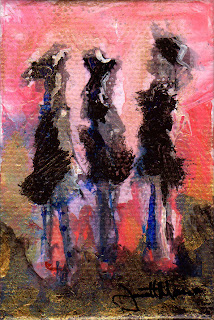 An itty bitty shopping trip! This is Myra, Bonnie and I on a shopping trip. We are purchasing art materials and props of course!
We are thinking about traveling to France to visit Martine, have her show us all of the great pastry shops and introduce us to Leo, the toucan!

What fun to travel the world via computers and imaginations!

The colors in this itty bitty are a lot brighter than portrayed here. The hot pink did not come through photographically.... hmmm. Another one of those, "you need to see it in person!" 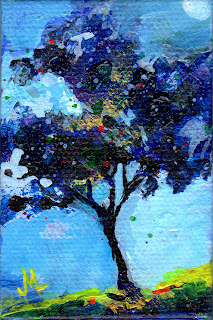 Thanks Bob Burridge! It's an itty bitty tree with apples or fruit of some kind. Itty bitty, like 3 inches by 2 inches! Oh the world of small paintings.... I know leigh, I think I may have over worked it, oh I may have to work it over, I mean paint another one!

Tomorrow is another day! Yes, I'll see you tomorrow! 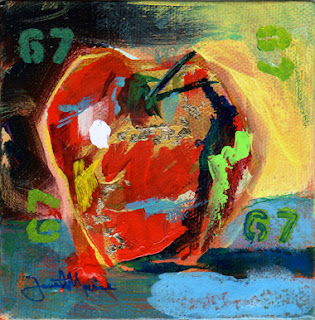 When it rains... we get apple blossoms! I know that makes no sense at all...

Have a great day and I'll see if I can't give you a few more apples this week! 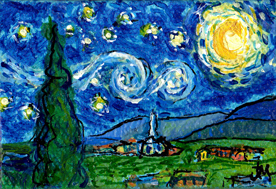 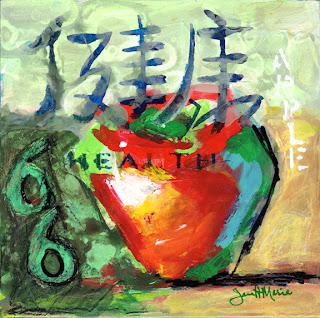 Oh no! I didn't put gold paint or gold leaf in this one... the ground on the right side is kind of golden, does that count?

The symbols at the top are Japanese or Chinese, I need to check, but I believe it means health! 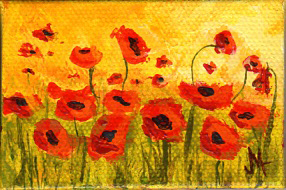 It's an "itty bitty" meaning, 2 inches by 3 inches! Thought I start putting a few of these together for the upcoming Stutz Artists Annual Open House.

This itty bitty is acrylic through and through, just a cute little painting. I'm deciding how I can make the little easels for these paintings.... hmmm, maybe my sister Suzie can help me figure it out!  : ) 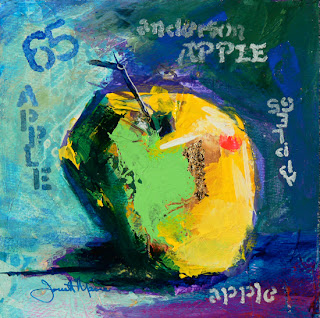 Very rare and one of a kind the "Anderson Apple". No less this apple is part of the "Golden Apple Series", very unique indeed!

That red color in the right hand corner of the apple is a hot pink! Yes, hard to see in the photo...

Number 65 and moving right along! 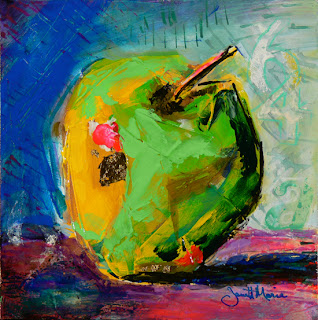 Whew, I changed it quite a bit!
Posted by JanettMarie at 5:10 PM 2 comments: 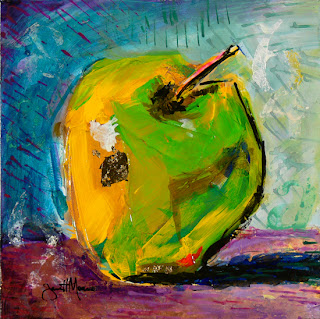 Just a little splash of gold leaf on this gold delicious! Of course the gold leaf doesn't translate very well in a photo, but in person you should see it!

Oh! You are all invited to the Stutz Artists Open House April 29th and 30th, so you can see this painting and all of the apples paintings I have in person!

PS: This is apple number 64!
Posted by JanettMarie at 8:35 PM No comments: 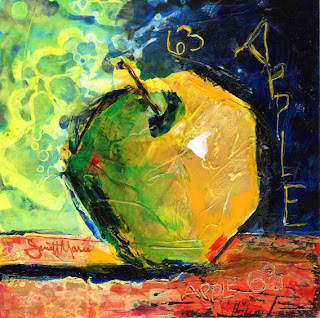 This golden apple doesn't have gold leaf in it because I have so many other textures going on, it seemed like that would be a little too much for this little guy.

Last Summer I purchased some Golden brand Molding Paste that was on sale. Friday I thought I would give it a try. I put down some of this thick stuff and spread it around with my painting knife, then I had to let it dry. If you see it in person it looks like plaster or something that is spread around all textural like. The bottom right corner, I scraped "apple 63" into the paste. Such fun!

Number 64 will be along tomorrow! 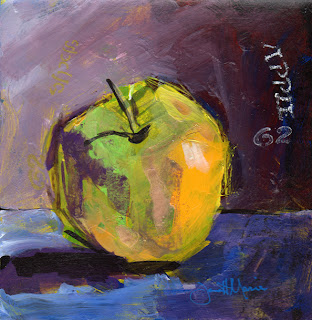 Third apple for the Golden Apple Sub-series. The model for this painting was an actual Gold Delicious, but I put green in for good measure. What do they call that? Artistic License?

The paint I've been using for the aquamedia is Golden acrylics, the heavy body stuff from the tube. I call the medium aquamedia because I will also use other water soluble materials in the painting, like Derwent Inktense pencils or Portfolio water soluble oil pastels or even Caran D'Ache Neocolor II water soluble crayons. This one did not have all of those but one or two were used for sure.

Maybe a video again one of these days... soon... 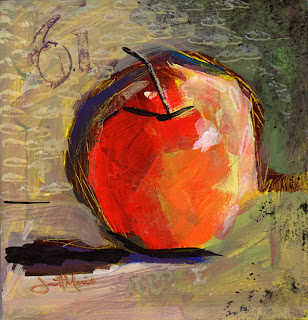 "61 Miles Per Hour" is that how fast I need to go to finish this series? Just keep breathing JanetMarie!

This little painting has gold highlights in it, as it is part of the sub-series of golden apples. I may have to consider a little gold leafing on one of these little jewels... hmm.... this is so much fun! 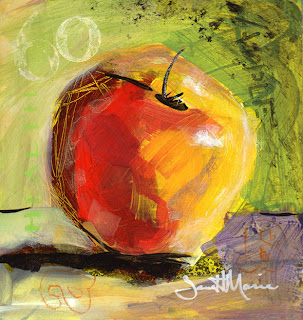 Where have all the apples been? Here we are! Apple number 60. It was a week ago today that I painted and posted number 59.  The girls "Styling in Red" had my attention last week I guess.
This painting has a touch of gold. I think I will put the touch of gold on the next ten, making them a sub-series of the 100, and these will be Ten Golden Apples!
Mmmm... where is that apple pie Martha? Oh? All I have to do is ask?
Enjoy the weather!
-jM
Posted by JanettMarie at 12:45 PM 1 comment: 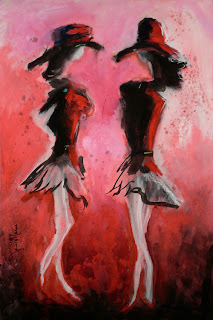 This painting is not exactly "Little", it is 36" by 24", can you see it that large? It's fun. It's mixed media on canvas and it is the first time (that I can remember) to use one of those Chinese brushes dipped in black india ink. I don't know where I got the brush but I've had it a long time. I guess it was asking me to paint with it! I used it to add the accents to the girls skirts. The brush made some pretty nice lines.

"Red in the Spotlight" 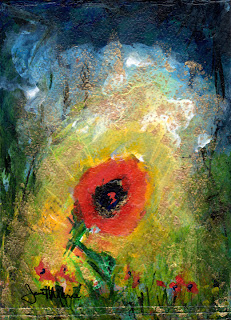 Okay, maybe it's spiritual or something, some times paintings just come out of no where... okay, where do they come from? I give up! This is one of those paintings... I apologize ahead of time, I don't know where they come from. If I find the answer I will let you know.... first thing!  ... Intuition?  Ummm...

I will have a painting to post for  Friday for sure... it's not a little painting but it is a 36"x24" especially for February's Wear Red, Go Red.... 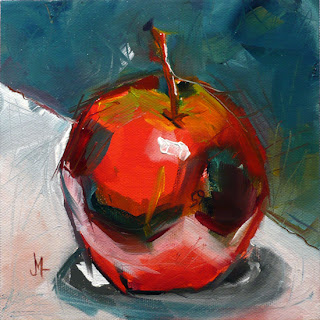 Oh Gala, apple number 59, I may need to revisit you tomorrow. Looks like a big hole on the right side! For some reason I had a hard time with this one... Oh Gala...

I couldn't help myself, there is a small "59" on this painting. I'm kind of liking the idea of the paintings having their distinguishing number on the front instead of the back of the surface.

Because of the ice storm we are having, I didn't leave the house today. I worked instead on learning how to edit the painting video I made last week. Little by little I'm learning iMovie. This movie is a long at 15 minutes. I hope to figure out how to speed up the movie next. This time I learned to put a title and music to the movie.... Oh Gala! 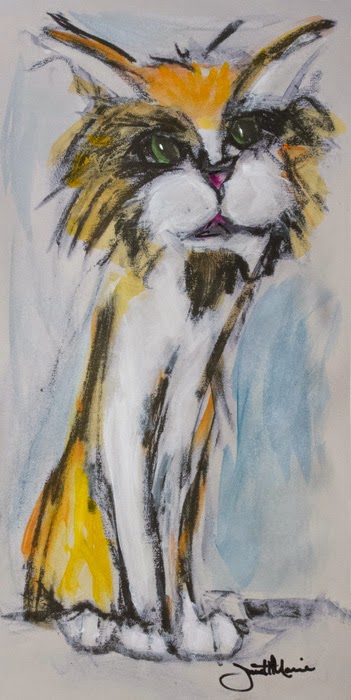